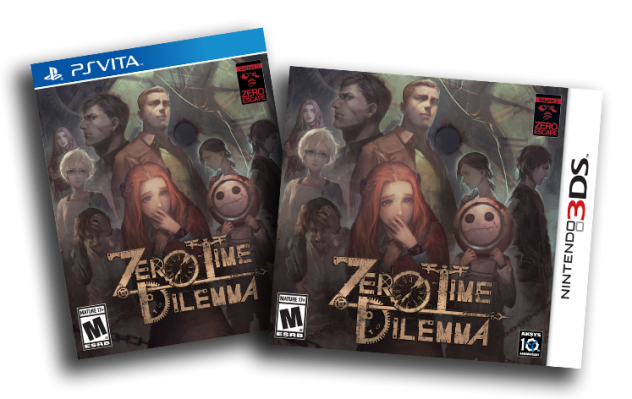 Once upon a time, there was a little unknown game called 999. Having released in Japan in 2009, it made it's way to the states with little hope of any sales since Japan didn't realize the gem they had in their hands. Lo and behold, 999 became a hit in the US and gamers were scrambling to get their hands on the visual novel that plays like a Saw movie. Six years later Zero Time Dilemma, the third game in the series, has finally arrived and thoroughly enjoyed by all.

Set between games one and two, nine people are once again abducted and faced with moral decisions, all while trying to solve complex puzzles. The most complex of them all, who is zero, and why have they been selected to play this game. Fans of the previous games will recognize familiar names and those who haven't played may get some spoilers, so be warned. With new, upgraded graphics, I didn't recognize the main characters of 999, Akane and Junpei myself until I heard the names.

Trying to keep this as spoiler free as possible, I will say that if you haven't played previous games, think of this a book come to life. Much of the game play is actually watching cinematic scenes with the characters discussing what is going on, their past and what led them to this point in their life, and why they are this way. Take note and pay attention to what they say. You will need some of the info they give you in the game.

The nine characters will be broken up into groups of three with one defined leader per group. The player gets to decide which team to play and what room they will enter. Each room will consist of multiple puzzles, but only one way to get out. Take note of everything in the room and touch everything. The hardest part of the game for me wasn't the puzzles, but finding items. On a small 3DS screen, tapping on an item was a little frustrating as I knew I needed something from this particular item, but it wasn't until I hit the exact spot, like a hole or a minute detail for example, that a new option arose. Another thing to remember when playing, if you are stuck and can't seem to go further, go back to a previous play through and change your decisions. This can unlock new levels. This also triggers the characters to remember scenarios where they, or others, have died, and changes the dialogue.

One thing to remember throughout the game is to question everyone's background and the person they are. Always read the notes because even those that may seem insignificant have meaning in the end. There is a butterfly effect. Every action will change each character and the moral compass will swing erratically in this game. Don't be afraid to kill people or to make the "wrong" choice. Sometimes, they lead you to right ones. Also remember that sometimes, you're just going to be forced to do so. This is one of those games you'll want to keep away from the kids.

I was hooked from the beginning to the end of this game and spent a good thirty hours until I was done. One tip I will give, have a little notepad to scribble codes and notes on. The in game memo pad is fairly worthless since you can't have the memo pad and the puzzle open at the same time. The puzzles are well done, made to make the player think things out thoroughly before getting the right answer. While you can cheat a bit to advance the game and find codes online, it's not worth it since certain scenes have to be played before reaching the final revelations.

Characters are well developed and deeply layered. Each one has its own personality and a hidden background that's slowly revealed while playing. These characters will make you question your own sanity. And while some of the characters are from prior games, certain things revealed about them will leave you completely surprised. Those thirty plus hours of game play were some of the best I’ve played this year. 2016 3DS game of the year for sure. While the game wraps up the questions brought to life in Virtue's Last Reward, I don't think this series is quite yet done. Or so I can hope.

Other Games in the Series